Recent works that Bremen council have carried out to cement its cycle city status seem to be ineffective.

Cycling round the city, it is noticeable: Bremen is a bike city! Especially looking at it from the Newcastle/UK angle – Bremen is a bike city to behold. You can even see it reflected in the typical types of bikes Bremen citizens routinely use. Enough niceties. I employed some critical thinking too here and here (video)… to allow Bremen to look and develop upwards. Orientation up, rather than looking down, is important: it allows self-critique to take place as well as plans for improvements to be made. Upwards I would first-and-foremostly define quantitatively, in numbers: ever more cycling to take place and more and different people cycling – as well as qualitatively: do you like cycling here? What would make you cycling (more)? Where is it you don’t cycle (but would perhaps like to, as it’s a more direct route)? Etc. You catchmedrift. Asking people for their opinions, especially when new things have been built – Bremen’s Fahrradstraße (cycle street) mania springs to mind here.

So, how is Bremen doing? Mode share numbers are hard to come by, and a bit of a pinch of salt is needed. It does however seem that Bremen’s cycle share has remained stagnant for quite some time. There is the indication that since the 80s the cycle share has been hovering somewhere between 20-25% with no clear upward trend. There also seems to have been a cycle dip in the motoring age of the 50s-70s (which can be found in so many (Western) cities). But generally, figures are hard to find! This is astonishing. If council truely appreciated and valued  what it’s got in its cycling heritage, why would they not keenly collect data? You measure what you care for, right?

And the recent infrastructure projects? Well, to me it looks as if the vehicular cycling principle is currently prevailing here in Bremen. Cycling has been mingled with motor traffic, rather than widening of cycleways. Here are some photos. 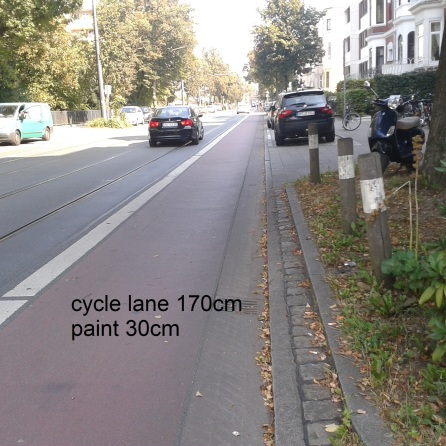 What keeps Bremen (council) from seeing its real assets: its protected cycleways (some examples below). Granted, some of these are pedal parodies… but why not argue from the position of the cycle-specific space? Why not provide real bike breadths of 2 metres minimum for unidirectional cycleways? But, well, maybe Bremen has also fallen into the trap of automobility, and its little brother vehicular cycling. And maybe that is exactly why the cycle share is not going upwards. 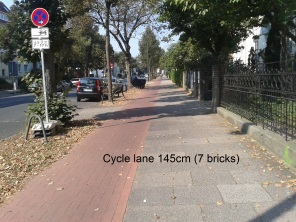 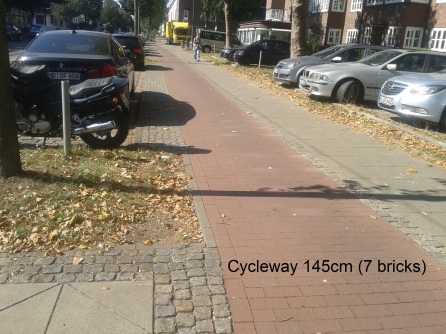 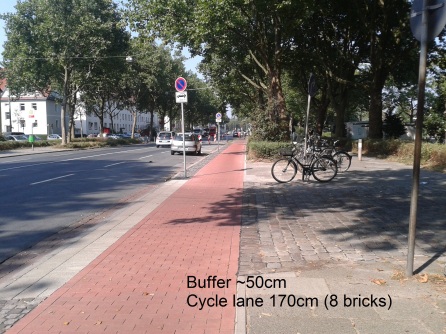 One thought on “Tales from Bremen – Germany’s cycle city”

here and there and nowhere

The Alternative Department for Transport