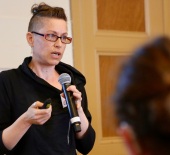 On 12 June 2017 I present: Nudging towards a communal concept for cycling research. It is an attempt to crosscheck the common policy elements (radical, liberal and conservative) with conceptual frameworks for transport (from different research fields). The conclusion is an illustrative depiction of emphasis (for research, policy, marketing etc) in low-cycling as well as high-cycling countries, and contains a plea to resolutely acknowledge urban design in academic studies

Audio online (sorry about the lacking quality) youtube – including an excellent question which was posed by Lake Sagaris, and a brief chair’s comment from Peter Furth

Motivation: Velomobility (Koglin, 2014) has been knocking on the door of automobility (Urry, 2004) for quite some time. But for transport cycling to increasingly gain political and societal traction and attention, divergent academic debates should now coalesce and sharpen in their intensity and intelligibility. The motivation, here, is to seek social change through finding a clearer and more concerted voice for cycling research and academic advocacy.

Objective: Working from a common conceptual model can focus research, foster and inform wider debates on transport, social justice and climate change, and generate higher levels of impact and outreach. I want to take stock and summarise the existing frameworks of investigation, before moving on to sketching a collective concept for possible use across the relevant disciplines of sociology, psychology, public health, engineering and planning alike. It could also help to normalise research approaches between high-cycling countries and countries of low cycle participation, where the researcher’s standpoint and social norms differ greatly.

The focus, here, is on transport cycling specifically, not leisure cycling. The reasons for this focus are transport cycling’s close links to transport-transition processes, achieving carbon reductions, health improvements through integration in everyday-life activities, personal and collective economic advantages, civilising the urban environment through crash and noise reduction and better air quality – to make the main points.

It is no surprise that research’s starting point is to get people cycling. Various conceptual models, outlined in the next paragraph, suggest ways of unpacking and operationalising this affable aim. Answering how to achieve higher numbers of people cycling can aid post-research implementation as well as guide research itself.

A common concept in use is the Socio-Ecological Model (Barton & Grant, 2006; Hanson et al., 2005) that conceptualises an individual’s dependence and interaction with personal, social and environmental factors. Panning away from the individual environment, the Social Practice Theory model (Shove, Pantzar, & Watson, 2012) highlights wider processes of professional practice, collective norms and social arrangements – some normative and tacitly obeyed, some more deviant and pushing of the status quo. For a fuller system the socio-political gaze of the Staging Mobilities model (Jensen, 2013) provides a useful framework graphically describing the relationship between ‘above-staging’ institutions and the ‘below-enacting’ society creating mobilities.

Research has been convergent on the importance of foregrounding the material, structural environment in relation to increasing cycling levels (Monsere, McNeil, & Dill, 2011; Pooley et al., 2013; Pucher & Buehler, 2012). The models seek to describe the settings of transport and mobility and expressly show angles of adjustment and reinforcement. When looking at the models one conclusion is apparent. Concentrating solely on the individual has been an incomplete method and approach in the transport and health sector for an extended period of time (Spotswood, 2016). Relying on an individual to change their transport behaviour is unlikely to be successful unless it is coupled with modifications within the social environment and the built environment. Four recent models (Acker, Wee, & Witlox, 2010; Barton & Grant, 2006; Hanson et al., 2005; Jensen, 2013) from four different research fields (psychology, public health, planning/health and sociology respectively) will be assessed for inclusion of radical (structural), liberal (education) and conservative (personal responsibility) policy elements (Stone, 2001).

I summarise with remarks on the indispensable factors for an inclusive model of transport-cycling research.

Contribution of the scientific work: The moral imperative should be to support transport cycling – and its multitude of benefits – as best as we can. Taking stock and gauging transport cycling’s current investigative frameworks for research and outreach suitability should contribute to sharpening the academic voice and impact. The impact may, so would be my hope, extend to improve outreach and, more generally and longer term, assist social change for the common good.

One thought on “Scientists for Cycling colloquium 2017”

scribbling -==- trialling errors -==- away with the faeries