I have been fidgetting about this for quite a while, stemming from the long and winding tunnel of ethnographic angst that I was dragging myself through over the past few months. But coming out the other end and seeing a light sometimes means just doing something – anything, taking the plunge.

To my surprise the cold deep water has been feeling rather nice and warm, if however still very deep. Over the new year break I devised a cunning plan of a calendar. Shamelessly exploiting my store of emails (I delete very few and I do a lot by email), starting 1 January 2017 and continuing each day for a year, I will embark on re-visits of past weeks: looking back at sent emails for a particular week in a certain year. Given that there are seven days in a week I will be looking back seven years. This gladly covers my seven years of campaigning. We do so very much like coincidences like that! 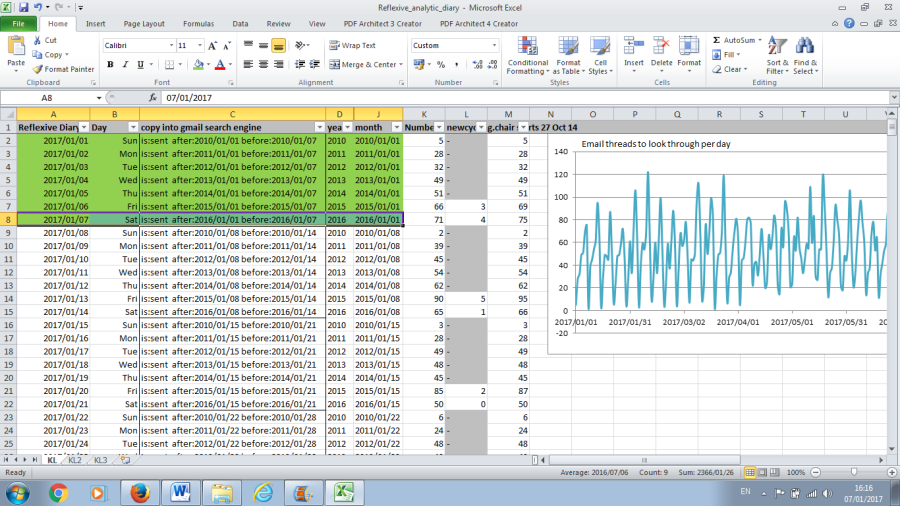 Sticking to this schedule for a year I hope to be able to capture an impression of seven years of my life by reliving the moments presenting themselves to me in that week of emails. In preparation and to check if this was feasible at all, I created a spreadsheet (yes, I love them so much) listing the amount of emails threads in every week since January 2010 (that meant making 365 entries). Plotting them, they come out looking rather peculiarly like a heartbeat, with its maxima envelope lying in the years 2014 or 2015. Taking this approach may also mean – I shall see how this altogether develops – that my PhD may spill over from its three years. Oh dear, diary.

My recording medium is film. Following a quick cursory look at “my week in emails”, I then turn to the laptop camera and record for a set length of three minutes what happened in that week, with a few seconds at the end devoted to comparing that week to today if time permits. Keeping this up throughout 2017 would create approx. 150 minutes of footage for each year from 2010-2016 (with 2017 contained as the viewpoint). Once there is a full year of filming I can put the recordings into their correct time sequence and start the interpretative work. I am excited. It will be hard, but the outcome will be worth the effort involved.

scribbling -==- trialling errors -==- away with the faeries